This is my first ‘nugget’ that I present for the show. Actually, it isn’t a mixtape I created but an old recording of a radio show that produced and broadcasted in the late 1960s in Israel. This show was produced for the Passover holiday and the period of the Sheaf – the symbol of the harvest that begins in this era of the year. I decided to upload this recording almost as it is, although I had to cope with the problematic quality of the recording which was made from an AM frequency radio station on a pretty worn reel-to-reel tape. Here you c 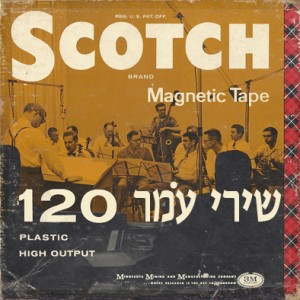 an listen, like me, to the authentic sound of the young Israeli country, valuable and musical. This collection of songs contains an interesting variety of arrangements for the traditional songs: woodwinds ensemble, choirs, chamber orchestras and even a jazz-funk ensemble.
I hope that any of you who don’t enjoy listening to this kind of archaic vocal presentation will leave it aside and pay attention to the fascinating instrumentation and arrangements. Listen to the epic arrangement of ‘Ha Lakh’ma anya’ (this is the bread of poverty – the Matza bread) and the entertaining arrangement of ‘Dayenu’ in jazz style with the use of the vibraphone, which in my opinion was a very innovative choice for that period in Israel. The amazing orchestral symphonic for ‘Avadeem hayeenoo’, which can be translated as “slaves we were in Egypt,” sounds like a fancy film soundtrack when the lead instrument is the cello. There are many more interesting examples.
This collection is a great model for the performances that were made for those important songs. A lot of them created by Matityahu Shalem, who was one of the leading songwriters of the new Israeli nation in the age of its establishment in the late 1940s. His creations based on the traditional stories from the Bible but with a new kind of secular interpretation and adaptation that fits the general atmosphere of pioneering.
For me, what was very interesting to find in these recordings is the absence of the accordion, which is a blessing since this problematic instrument ruled in most of the musical documentations in Israel until the 1960s. From the late 1960s and onward, the Israeli musicians no longer felt the need to use this instrument for the benefit of other instruments of any kind. I guess it was a better time because the intensive use of the accordion in the earlier age of Israel was a result of sporadic conditions, such as the absence of amplification systems or appropriate acoustic venues and the general need to perform in ‘battlefield’ conditions.

For those reasons, this radio show presents the beautiful and creative side of the music creation and performance of the mainstream culture that was produced for the public in the era. Here you have a link for a ZIP file that contains all the songs in separate mp3 files.