In these unbearable days of lack of real positive horizon, I feel it will be the right thing to upload this post to the air. I don’t have any kind of pretension to give here an idea for conflict solution, or maybe it will be more accurate to say an idea to prevent from these factors to rule our lands and governments who just want to keep the peace away from us.
But, let’s put the politics aside. This time I decided to wallow in the most nostalgia without any kind of concerns about my will to share ‘decent’ musical material or less familiar like I tend to do on the posts of this blog.
All started a few months ago while I cleaned my apt. I decided to solve some very irritating problem that I found just when entered to live here, but it took me a while until I decided to do something. Are you familiar with these sliding doors that slide into the wall? I have such double doors in my bedroom. For some reason, they couldn’t be open completely, and it really pissed me off, so I removed the stopper that prevents the doors to move the opposite way, and then I got way to the inner tunnel inside the wall – and what did I found there? the thing that prevented the doors from sliding to the end were simply old newspaper chunks that someone stuck there for an unknown reason. Of course, I pulled them out and as an elderly coming nostalgia enthusiast, I spread them, and I discovered some entertaining stories and advertisements.

Most of these newspapers are from 1984, and then I recalled that I have a reel tape found in a pile of reel to reel tapes that my former boss gave me some years ago while I worked in a local radio station. My boss worked before for years as a technician in the national Israeli broadcast authority and one of the things that he did there was preparing commercials and jingles for the radio. Until the computer age with sound and actually until the mid-1990s the radio stations used Cartridge tapes for jingles and commercials (you can see bellow the pics of these tapes and their player). 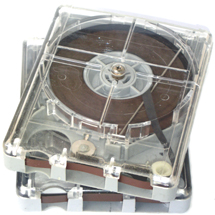 One of the advantages of this kind of tapes is that their internal magnetic tape is constructed as a loop when the recording material finishes it returns to the start position and the player automatically stops and ready to play the cartridge from the start.
The cartridge player had a nickname – Toaster, because of the resemblance to the bread toaster. One interesting anecdote, I don’t know who of you can pay attention to the audible signals between the commercials that I fixed between the songs on this featured mixtape. I remember myself as a kid hearing these ‘ding-dongs’ between the jingles and commercials and I didn’t understand why they been there. Apparently, this is the electronic signal that tells the cartridge player to switch to the next commercial that was recorded on a different cartridge and was located in a different slot of the player.
I came to a conclusion that these ads prepared for broadcasting at the end of August 1984. With the relics that I found behind my doors I got the inspiration to create this mixtape and then recalled with a pic of myself, very typical of this era while I was 6. I used to sit on the floor and played for hours with Lego and listen to the radio (besides my mythologic record player that I already mentioned here).
In this nugget I don’t find a lot of musical value with the songs that I picked, some of them I really love and anyway my purpose is sheer escapism when we have a desperate crisis.
For better routine, here is the new nugget: