A year ago I had a guest post on my good friend’s fascinating blog: the multi-artist, polymath Benjamin Esterlis, AKA Morphlexis. This post represents one of my greatest loves for the analog mediums in the world of sound.

Benjamin wrote an intro for my post:
Some months ago I got an email from Amir in which he told me how he takes my mixtapes and records them over magnetic tape reels in a way that he can experience them at their full potential. Wait a minute. I read this line over and over again to be certain that those were the words. “Reels” and “magnetic?” Is there somebody out there who listens to these mixtapes exactly as I imagined how this type of mixtape would be played in a perfect world?! It took me a few minutes to wipe the excitement and sweat off and to come to my senses to write reply with a little quest: Tell, demonstrate, take photos!
The positive reply from Amir would soon come, and he even told me that his photographer friend Maya Kapel got into the plot and they were going to document the process soon. A few days ago, just for my birthday, (Amir, you don’t have a clue how happy you made me) I got the full demonstration: “How to convert digital mixtape and get it out to the open analog space”

From digital slavery to analog freedom 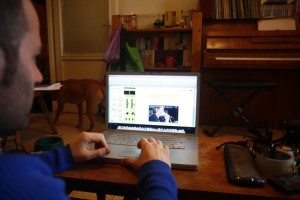 Over a one year ago I discovered this sacred wonderful blog. I found that Morphlexis was dealing a lot with issues I could relate to as a musical creator. I decided to sample from the presented mixtapes. First, I was so impressed with the delicate work of art created from the interesting overlaps between the tracks. The fact that the mixtape streams through continuous line without any silent breaks, and the incredible creativity and well-chosen selection of pieces – all surprised me. I was immediately completely captivated with the rest of the mixtapes on his blog. People who are familiar with me know how difficult it can be to please me with music… and Morphlexis does it for big!

Now, we’ll examine one of my deepest ’scratches’ – my compulsive love for analog audio equipment. I guess most of you confirmed music lovers, know the general notions about analog recording formats. Now, I’ll present you my method for taking these digital mixtapes and making an improvement to the analog world.
Since I’ve become familiar with them, it was clear to me that they must receive their appropriate musical honour. Let’s say that I have spare time to sit and listen to music at home (unfortunately it doesn’t happen much). I’m really upset with the thought that I’ll listen to music on my computer, even though mp3 file conversion satisfies me these days. 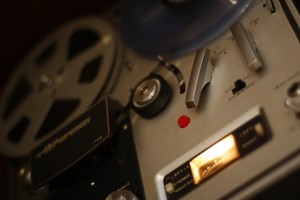 Still, the notion that I’ll sit and listen to music that breaks out from digital decoders really decreases the musical value for me. I believe that when music plays as a complete product from digital format it loses it’s life and the resolution quality doesn’t matter. It’ll be better to have the maximum resolution possible, since digital ‘out of tune’ is not audible. When we play music through analog format, it will always have a chaotic influence from the environment – temperature, gravitation, friction, etc. The advantage of analog format usage is inaccuracy. In the 1980s and 1990s, when there was a digital alternative for analog recording, the general perception was that this analog inaccuracy was a disadvantage. No one bothered to mention that this analog inaccuracy is chaotic. What turns it to be unmeasurable, it can change from any external cause. I compare it to playing on an acoustic instrument. Any hit, pluck or blow never repeat its previous one, no matter how we try to do it accurately. It will always have a different physical effect on the performance. Therefore, live playing is much more hypnotic and appealing to the ears than listening to sterile digital synthesised programming. Like acoustic musical instruments, the analog audio equipment restores the audio documentation each time from scratch. It will always add a slightly different change, an unpredictable, chaotic characteristic. This is what gives the music an added value when live. (I guess not every person will agree with me, but there are plenty of others who will prefer the frozen sterility of digital audio devices, and this is a matter of taste of course). So I decided to convert these mixtapes into analog format since I have the equipment and a lot of appropriate medias (I refer to reel-to-reel audio tapes and tape recorder)
I started the job immediately:

You can watch the video above. I downloaded the files of a mixtape, then opened my media player on the comp when it was connected to my stereo system constructed from decent parts: an analog receiver from the 1970s, a special model of Technics turntable from the 1970s, Akai reel-to-reel tape deck and ancient Wharfedale loudspeakers from the 1960s.

When the music plays through the receiver, I prepare my recorder and put a reel tape on. The audio reel tapes are exactly like the more familiar cassette tapes in their way of usage, the reels are just bigger and like cassettes you can record and erase over and over again. Then I put the recorder to ‘record’ mode but paused it. I watch the recording level meter and pay attention as it swings across the ‘0 dB’ mark. This is another advantage with analog recording: it can absorb ‘peak’ level sparks that digital format can’t deal with. When you have peaks on digital recordings they’ll play as distorted clips. I set the reel to a place I want the recording to begin (again changing the mode to ‘record’ and pause the machine), go back to the computer, set the mixtape to the beginning, release ‘pause’ on the reel deck and press ‘play’ over the computer. This is how the conversion is done. It is important to say that dealing with such equipment takes time and regular maintenance, but the final pleasure is more than worth it. 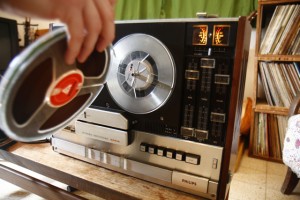 Here I present some other process pics from and another cute device that I collected recently, the Philips N4416. It is more sophisticated than the featured Akai and works with an electronic mechanism while the Akai is completely mechanical. Still, I prefer the Akai sound because it works with vacuum-tubes, which only for themselves gives another chaotic colour for the complete sound experience. In general, I’ll add and explain more, and I make the recordings in the lowest recording speed over these recorders. Usually there are 3 speeds for recording on the domestic reel-to-reel recorders that were in production from the 1950s to the 1970s. As you lower the speed, the sound quality decreases. You lose the higher frequencies, but you gain more playing time and the analog side effects are bolder, which increases the analog experience for me.
Long live analog!!! 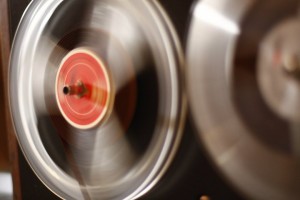