The suitcase of wonders

As I mentioned in one of my previous posts, I’ll expand my words about my musical birthplace – My first record player. It accompanied me, placed in the room’s corner on some cabinet while it plays and plays… My parents taught me how to turn it on since I remember myself. The amazing thing is that I didn’t have a clue then that this is a changer turntable, one that can play six records continuously, as a matter of fact, six sides of records. You can watch this clip with my lovely first record player:

I discovered this trick only much later. As a child, I listened to the records in the usual way – one by one. A typical picture you could see if you entered my childhood room in my parents’ home was a small child sitting on the rug and playing with Lego for hours while listening to records from the 1960s. In much fewer times I listened to some children records, especially the Israeli Children Music Festival records that were very popular in Israel while my sisters and I had grown. These were the only newer records that my parents bought beside those 1960s records my father purchased in his teens. One of my first memories as a young child was that I wanted to have a good stereo system. (How many toddlers in the age of 2-3 you know that wish for a good stereo?) Probably at this age, I was already aware of the existence of lower and higher frequencies that this record player couldn’t produce. It is a device that plays through one built in speaker (as is, it is Mono), the sound quality is minus mediocre, especially because of the use of a Ceramic cartridge. In general, this piece is very primitive built, even though it contains vacuum tubes (something that considered good these days), it has a small diameter speaker that can’t provide impressive sound quality. I must point that the suitcase and the internal amplifier built in Israel (there is a label of the manufacturer inside the case). The turntable itself made by Garrard, which was one of the most famous British brands that era.

It is an ‘autoslim’ model which means it senses the size of the record automatically while it drops down through the long spindle. There is a side lever that moves while the record falls to the platter, and then the arm knows where to land, whether it’s a 7, 10 or standard 12-inch record. The wish for a good stereo system fulfilled in a later age, and maybe because of this first absence, I collected (fixed and also gave to others) many types of record players through all the years.
And now for the music itself. The small record collection that I had then (and of course still exists in my current library), included mainly Rock’nRoll, Twist, Blues, Soul and some Israeli music that my father bought as a youngster from the beginning of the 1960s til 1966. Then he recruited for the military service (there are no any newer records that he bought after). When I was ten, I started to buy my own records.

Here are some things that he tells as a response to my questions: 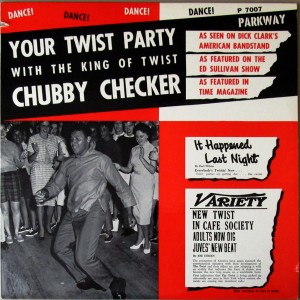 “The first album that I remember that I had was of Chubby Checker [the singer that sings Let’s twist again]. “My exposure to new music and especially from abroad was very limited. We had in Israel only three radio stations back then, and they used to play western pop music very sporadically, there wasn’t any scheduled radio show for this music or rather a special DJ that played this music. We also listened rarely to some broadcasts from abroad like the BBC stations through the Short waves, and we had some exposure from there. I don’t remember any record purchasing experience. In the Qrayot area (Haifa’s suburbs) there were not any record stores, and in Haifa, there was ‘Hataklit’ record shop in Hertzl street, which was quite modest. I remember that there used to be some undedicated stores, like toy stores, or stationery shops that used to hold some records for sale. I remember I visit a record store on Ben Yehuda street in Tel Aviv, but that was it. I must say that differently from what today’s media use to mention about the 1960s in Israel – as the establishment was against the pop culture from USA and UK, I haven’t felt it. I was a cadet in the social youth movement, and then a guide. At the youth movement activities we had a very ideological environment, and still, I remember at the same time, there was a club, its name was ‘Fulfillment’ [And I add here – how ironic…]. In this club, they used to play music for dance, and we used to go there right after our meetings at the youth movement house, so I don’t remember that was any rebellion feeling among the youth. From the other hand, there wasn’t some form of typical engagement or swarming after the culture or fashion from abroad, and particularly not after Rock music. I don’t remember any Rock concerts in Haifa area, and I don’t remember any person that held an electric guitar at home or any group that played around. 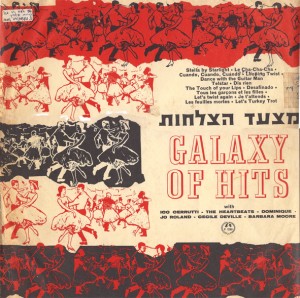 About the record player – it was placed in my room; my parents didn’t care much about music. I knew about this function of the automatic record changing, but I didn’t like this feature, I thought it could damage the records, and I didn’t use it. Later I had a reel to reel tape recorder, and I liked the idea that I can choose the music myself [My father made mixtapes!], And I don’t have to be dependent on the fixed playlist of a record, that sometimes I didn’t like all the songs it contained. This way I recorded music from the radio or from records I borrowed from friends, and that was enough for me – the songs were what was important for me and not the audio quality, that was the reason that I never bought a stereo system. Even though I always find music entertaining, it has never been in high priority, and when I went to the military service I came only once a month to visit home and besides for relaxing I had other things to do that were more important than music.”
Big number from this record selection were various artists collections that been edited in Israel and published under ‘Hataklit’ label in Haifa. I found an interesting interview with ‘Hataklit’ owner, Dov Zeira that tells very briefly about his pioneering with this subject in Israel, by distributing this music. TL;DR he answers to the interviewer question about the past: “I had the sense to know what will be a success, that’s all.” 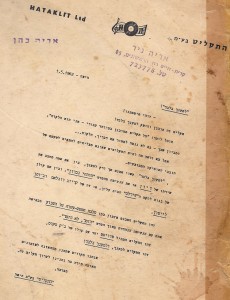 In this picture you can see the back side of the sleeve of one of these records, which says:
“For you only!
That’s our slogan!
This record designed and produced for you only!
You can say – every record created for me – I’m the customer
And therefore – we wouldn’t try to contradict your words, the customer…
But go out and see how many records can’t adjust themselves to the average music amateurs. “For you only” produced only for you, wherever you like Dion’s singing or the theme from the film “Navarone guns,” or if “The Shirrels” voices are your favorite or Craig Douglas or John Leyton.
This record contains a song like “Teen queen of the week” together with the fantastic tune from the movie “The singer, not the song.”
This record contains Twist following the voice of Jack Scott; this is a record for you, and for you only!
We hope that you will enjoy from the songs same as us while we compiled this record.
Sincerely,
‘Hataklit’ LTD Haifa”

As Dov Zeira’s words, like my father, you can hear some lack of particular interest that was in that era for this music, I guess they probably got these things as they are and didn’t feel that something new or important is happening. And amazingly, I don’t know if it’s luck or not, but those collections designed primarily my music taste and the way that I understand how the music changed profoundly in our days.
So yes, after I hear these things from an authentic source that lived in those days. As a witness to the development of the music and the modern fashion in the world and the way that it accepted in Israel, I have a little bit stronger and accurate perspective now, comparing to what the current media likes to tell about the 1960s in a nostalgic way.
There wasn’t such resistance for things that came from abroad, and from the other side, people and youngsters didn’t run after it, they were busy with other things. While I thank so much that I won, probably accidentally, to be exposed to that kind of music in that sort of way. So here is a nugget that contains a good selection from the soundtrack of my childhood. I think it has a lot of value, most of these songs didn’t turn to be classics, but I found a lot of musical value inside them, much more than a personal nostalgia. I made this nugget from the actual records that for my great pleasure, they survived the years especially after a small child abused them. I even hustled and connected my old record player to the computer to transfer this experience in the most authentic way that I can, with the limited monophonic sound. Pay attention – those of you who have sensitive listening capability will hear the slightly faster speed playing from the standard. That’s the way this record player is playing (it doesn’t have a Pitch knob like in advanced tables where you can adjust the playing speed accurately)
That’s it, now click the play: