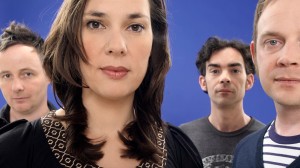 It seems that I’m more of an astronaut than I think I am. A few days ago I met with my friend Alon Brayer, an artist through and through. He updated me about two albums that came out during the last year. One of them is Stereolab’s ‘‘Not Music’’, and the other is ‘’The Trip’’ by Laetitia Sadier, who is Stereolab’s leader. So, thanks to Alon for the tip.

In the last decade, one of my greatest musical influences has been Stereolab. In my opinion, they include all the best raw materials for modern music creation: authentic integration of acoustic elements (every acoustic instrument, human voice or natural sound source) with electro-acoustic (electric guitars, electric basses etc.) and pure electronic (analog and digital) in one music piece.

I think their music outstandingly resembles the musical artistic trends of the last two decades – playing, sampling or manipulating existing materials and reorganizing them in a manual, sometimes primitive way. And that’s even though they have all of the current computerized luxury that make this kind of work much easier and neater. Obviously, Stereolab is far from being pioneers in these kinds of matters of sampling and sound editing. These techniques started way back in the 1950s over magnetic tapes; the page is too short to hold the story of recorded sound design. The special thing about Stereolab, in my opinion, that sets them apart from many contemporary electronic music artists is their massive live playing, and that’s even if sometimes they leave the marks of imperfection in the final recording I think this is part of their magic. You can hear the ‘dirty’ playing performance in ‘‘Silver Sands.’’

For those of you with a sensitive ear, it will be easy to detect the human character of the synthesizer that begins the track. Most musicians these days prefer to create this kind of musical part with computer software, even if the instrument sounds like a vintage one. This way they can fit the part of the playing in the rhythm grid (“quantize’’ in the professional jargon) and then the playing would sound tight and sterile. Here we can listen to a very brave choice. On the border of Sisyphean (tedious) in the way that they choose to perform – the result is live and human, even though this track has a completely electronic approach.

This track originates from their previous album, ‘‘Chemical chords’’, and actually it is very hard to find any resemblance between the original and the current version. For my own opinion (and many other addicted fans of the Lab), “Chemical Chords’ was a true disappointment compared to the other albums they issued since 1996. Stereolab started in 1991, but only in 1996 when their album “Emperor Tomato Ketchup” debuted did they make an interesting shift from a band that played monotonous Drone Rock to one that created melodic and very richly arranged and produced songs and pieces. They joined John McEntire from Tortoise as a music producer and additional player – this way you can distinguish his marimba and vibraphone typical playing and arrangements for strings and brass, which were absent in their pre-1996 albums.

“Not Music’’ completely deviates for the last formal Lab release in 2008, “Chemical Chords.’’ After this release, the band announced they were disbanding. “Not Music’’ is actually a collection of leftovers from the “Chemical Chords” recording sessions, and it is really fun to discover that these leftovers are much more interesting than the materials chosen for the actual album. In general, it really thrills me to discover each time how this band is so fruitful. Along with their musical activities, they used to do several collaborations with other artists. For instance, Laetitia collaborated with Blur in one of my favorite songs of theirs, “To the End.’’ And if I mentioned Laetitia, she owns a big credit too for her first solo album, “The Trip.” Laetitia had some unpleasant reasons to begin working on this album – her sister’s suicide. Apart of the very personal and touching lyrics, I think this is the first time that I can pay attention to her singing as a writer rather than another musical layer as she used to appear on previous works. Until this album, Laetitia’s voice was screened with a lot of sound effects and manipulations, usually her vocal part in the sound mix was quite low, and for me it was like another musical instrument, not mention that her French accent made the lyrical comprehension harder for me. I think the texts were in weaker priority in previous works, and Stereolab naturally preferred to put the emphasis on the music.

Here in this album, her voice is very present, and so the diction and the accent were much more taken care for in a way we can understand the lyics better. Pay attention to the song “Statues Can Bend.’’

I was so amazed when I heard it the first time. Laetita always sounded so happy and positive to me in her previous works, like a shiny smiley sun, and here suddenly you can hear a completely different side of her, dark and fragile. This song is a type of sorrowful Trip-hop, outstandingly exciting.

I hope that I achieved my teasing goal for the matter. Anyway, I’m going to order these albums on vinyl the first chance I get. 🙂